ANYCUBIC i3 Mega 3D printer. As I thought that finish would be very beautiful, I purchased it. 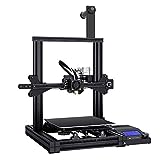 In Akihabara, we have seen various cheap 3D printers. However, the surface was not laminated properly and was uneven. It was necessary to rework the surface and fill it with putty. It was so poor that I didn’t feel like buying it. Looking at the various reviews on the net, this printer can print pretty nicely. As it was approximately 40,000 yen, I bought.

The photo below is the first work that outputs the sample data attached to this printer. It is an owl about 5cm tall.

It is laminated pretty neatly. There are stacking marks, but they are stacked correctly and the back of the owl is also very smooth. I’m very happy that you can print so beautifully the first time without changing any settings.

I asked my son to create data using Blender and tried printing it.

The thin walls are piled up neatly. The parameters are left as default. This is fun.

This printer is a semi-finished product and requires a little assembly. All you have to do is tighten the screws, connect the connectors and set the voltage. It is as the assembling video of ANYCUBIC official.

After assembling, adjust the height of the table. The manual is in English, but it was easy to do while looking at the pictures.

These steps were required.

Heat the nozzle and table (bed). Unless the nozzle is heated, the filament will not pass beyond the nozzle.

The preheat is in [Tools].

The current temperature displayed on the left increases rapidly.

After the current temperature rises to 190 ° C, wait until the melted filament comes out from the tip of the nozzle, and stab the filament.

The part that protrudes from the tip of the nozzle is pinched with tweezers and removed. Preparation is now complete.

When the text turns red, tap [PRINT]. Printing will start after a while.

One and a half hours later, the owl is completed.

From next time, the filament has reached the tip of the nozzle, so you can press the print immediately.

3D printers are quite fun. What should I make? Oh, let’s make an arm. （Past article: Can a doll’s arm be restored with a 3D printer ?!）

I can now draw handwritten pictures on electronic paper using the Nintendo DS touch panel
It is possible to read the compressed image from the SD card and play the sequential numbered image on the electronic paper.
Animation can now be displayed on e-paper
ニンテンドーDSのタッチパネルを使って電子ペーパーに手書きの絵が描けるようになりました
SDカードから圧縮した画像を読み出して電子ペーパーに動画っぽい物が再生できました