The 858D is a hot air gun with a thinner tip than a heat gun and temperature control. 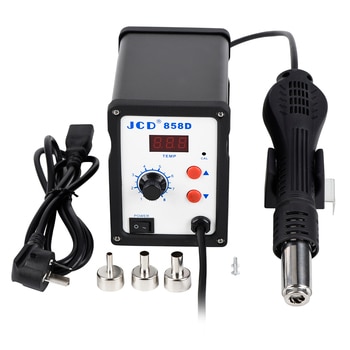 It is also sold on Amazon.

I bought a 110V spec one from Aliexpress.

It arrived from China in this condition.

When opened, the empty space is filled with bubble wrap.

The temperature of the hot air can be set at the touch of a button. This time I set it to 340 degrees, about the same as the soldering iron. In addition to the temperature, the air volume can be adjusted with a knob.

I measured the temperature with a thermocouple thermometer and it was roughly 340 degrees. That's fine. 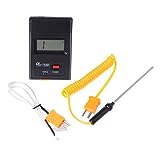 Try removing the Nixie tube, which has 13 leads, from the board. Since it is a double-sided through-hole, it is quite difficult to use a soldering iron and solder sucking wire.

I've soldered it with lead-free solder, so I'll try to melt the solder at the 340 degrees I just tested.

The pads are arranged in a circle and heated with hot air in a circular motion. After warming it up for a while, the solder melts and turns into a metallic color.

The "---" indicates that cooling has been completed and the airflow has stopped.

This is useful one

Unlike a heat gun, which heats up a large area, it can be heated locally, which may be useful for removing parts.

You can also set the temperature, which reduces the risk of overheating.

I bought a pretty good one. I'll be using this in the future when removing parts.