I want to charge the MacBookAir on the go

I have been using the Early 2014 models of MacBookAir. The battery runs out of charge in about half a day.I wish I could charge with PowerBank. I found a good cable on Aliexpress. 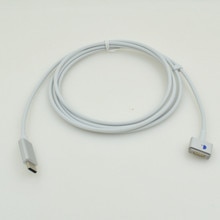 This cable is used to convert from USB TypeC to MagSafe2. It is a interesting cable. After and this, if there is a mobile battery of USB TypeC output, you can charge MacBookAir. I decided to try it immediately, because this conversion cable is less than 2000 yen.

I bought at the link destination of the shop, but early arrival , arrived in about 2 weeks from the order.

Usually it takes three to four weeks. While Well, I might accidentally.

Find a PowerBank that supports USB PD (power). I decided on the world's fastest J-Force JF-268PD60W. Large capacity of 26800mAh. We spent a lot of time examining the specifications, from expensive to inexpensive.

Maximum output 60W, so be able to fast charge

Usually, the maximum output of the product is 30W, so 60W of this product is very large output. I expected that MacBookPro could charge not only MacBookAir but also fast.

It can carry the airplane

Battery capacity is 96.48Wh. According to the article Engaget, if it is less than 100Wh, you can take it to airplanes around the world.

It will not have any problems

100W large output, such as emerging  manufacturers, new product is the charming but, safety is very important because the equipment to handle the battery in and large current. This product was available for sale in December 2017. More than a year has passed since the sale.

Product Japanese company has been planning

It is made in China, but it is a product planned by a Japanese company. I don't know if it's safe, but I thought it was safer than a foreign manufacturer. This is also my imagination.

As expected, Japan's shop you will receive immediately. Speed ​​is different from the Aliexpress.

I stab the USB TypeC to portable battery, it will  turn on the power . When connecting the MagSafe2 to MacBookAir,  charging has started immediately.

If you look at the system reports, it has been recognized as a charger of 60W.

It has been generally charged at 45W. Not charged in 60W, but will continue to increase in the battery remaining amount of the steadily macBookAir. When MacBookAir has 10% charge remaining, I started charging. It took about one and a half hours to reach 100%. PowerBank still had 1/4 scale electricity remaining. Even if the MacBookAir is fully charged, there seems to be extra power.

There was a MacBookPro Retina 13-inch Early 2015, which was also tried to charge.

MacBookPro even has been recognized as a charger of 60W.

MacBook Pro was charged at about 45W.One hour and 40 minutes to start charging from 8%. Up to 97% charge, the PowerBank emptied and stopped charging.MacBook Pro Retina 13 inch cannot be fully charged. However, it was found that the battery was almost fully charged.

It is heavy. But if you have this set, you can work anywhere with a MacBook. If you buy a new MacBook, you can still use PowerBank with a USB-C connector.

If you have a MacBook with a MagSafe2 connector, I recommend this cable and PowerBank.

By the way, I bought it in not amazon but Rakuten.

Because Rakuten gave me a lot of points.