I want an Alexa-enabled ceiling light 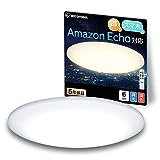 I was tempted to use Alexa on my Amazon Echo to turn the ceiling lights on and off with my voice, since it’s a pain to find the remote control.

Already, an Alexa-compatible ceiling light is available from “Iris Ohyama”.  But I would like to make it by myself.

Make a ceiling light with LED fluorescent lamps from Daiso

Again, I would like to modify an old fluorescent ceiling light in the room to LED with LED fluorescent lights from Daiso.

Using Amazon Echo's Alexa and ESP32 to adjust the brightness of the lighting with my voice
日本語版はこちら I used ESP32 and did a basic experiment to s...

It has also been found that you can adjust the brightness by instructing “Alexa, dim the lights” or “Alexa, brighten the lights”.

So, in addition to ON, OFF, I’d also like to incorporate a brightness adjustment function.

Adjusting the Brightness of LED Fluorescent Light Bulbs from Daiso

After examining the circuit of the LED fluorescent lamp of Daiso, I found that the brightness of the LED can be adjusted by changing the resistance value.

I actually modified the lighting for the photo shoot made from LED fluorescent lamps from Daiso so that we can use the volume to adjust the brightness.

Turning on, off and dimming LED fluorescent lamps from Daiso with ESP32

Each of the above individual functions has been realized.

Therefore, we would like to combine these to create a ceiling light with a dimming function that is compatible with Alexa.

The above diagram is a block diagram of the Alexa-compatible ceiling light we will create.  Use ES32-DevKitC for ESP32.  The ESP32 turns the LED fluorescent lamp on and off (switch section) and gives dimming instructions (dimmer section).

Since one LED fluorescent light is not enough as room lighting, I decided to use two.

Use the Solid State Relay (SSR) AQH2213 to turn on and off the AC power. This solid-state relay is a semiconductor type AC power supply relay in which the control part and switch sections isolated by light.  To control it, you only need to turn on and off the built-in LEDs, so it can be controlled with less power than ordinary relays, which is ideal for control by a microcontroller.

The AQH2213 also has a function called zero cross that turns it on and off when the AC voltage is 0V.  Since it turns on and off at 0V, there is an advantage that noise does not appear easily when turning on and off.

By connecting as shown in the figure above, it works as a relay.

The SSR is controlled by lighting the LED built into the SSR with ESP32. However, if you directly connect the output pin of the ESP32 and the LED of the SSR, an overcurrent will flow and it will be destroyed. Therefore, a current limiting resistor is placed between the output pin and the LED of SSR. This is the RIN in the connection diagram I mentioned earlier. This resistance value is calculated.

According to the datasheet, the LED only needs to flow 20mA and the voltage of the LED is 1.3V at that time.  If the voltage at the output pin of ESP32 is 3V, the resistance of the limiting resistor is…

It goes like this.  Let ”RIN = 82Ω” as a value that the resistor is readily available.

In order to adjust this resistance from ESP32, modify the circuit as shown in the figure below.

Connect three sets of resistors and switches in parallel (S1, S2, S3) and then connect more resistors in parallel.  The resistance value is shown in the figure.  With this kind of circuit, when each switch is turned on and off, the value of the composite resistance changes in steps from 16Ω to 2Ω.

The current flowing through the resistor can be varied from 37.5 mA to 300 mA in steps of 37.5 mA each, according to the simulation.

The above mechanism is used to dimmer the LED fluorescent light from Daiso.

Since the mechanism has been decided, we will design the switch.  When controlling the switch from the microcomputer, it must be electrically isolated.  Therefore, I decided to use Photomos relay.

PhotoMOS relay is a semiconductor type relay that is insulated by light.  Although the SSR used earlier is exclusively for AC, the PhotoMOS relay can also be used to turn DC on and off.

I decided to use the AQY221, which is a very small photoMOS relay with a maximum resistance value of 0.5Ω when it is ON.

The switch can be controlled by turning on and off the LED built into the photomos relay, but to control with the microcomputer, the current limiting resistor is required, just as in the case of SSR.

According to the data sheet, the maximum value of operating LED current is 3mA, so the current should be 5mA with a margin.  The maximum LED voltage drop is 1.5 V.  If the voltage when the output pin of the microcomputer is ON and 3V, the limiting resistance R is

I made a circuit diagram of the parameters so far.  By adding this circuit to the circuit of the LED fluorescent lamp, it becomes possible to adjust the LED current stepwise by the microcomputer.

The signal from the microcontroller showed that the SSR turns on and the voltage goes to 100V.  Test to see if it shines when connected to an LED fluorescent lamp.

The LED fluorescent lamp has been successfully turned on and off.  The switch section worked properly.

Disassembles the Daiso LED fluorescent lamp.  We will modify the brown PCB connected to the LED PCB.

Remove the two resistors on the back of this PCB.

Wire the circuit of the dimming part to the place where the removed resistance was.

Complete the circuit by wiring the two LED fluorescent lights and adding a surge absorber as a protection circuit to the power supply.

Now that the hardware is complete, We’ll make the software next time.

Milk Carton How to Make a Microcomputer Robot ,No.2 (Program Modification)