Follow @kohacraft_blog
ホーム
English ver.
MAX V CPLD "5M160nano" board and stencil that I ordered from PCBWay is perfect !
スポンサーリンク 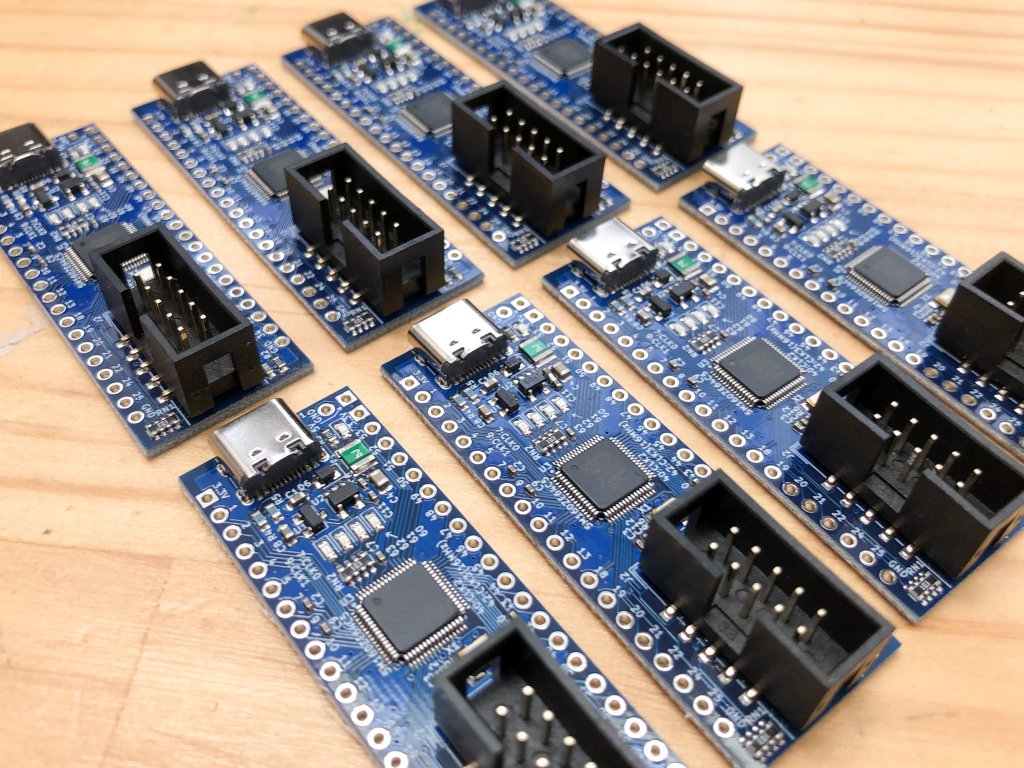 To make experimentation more convenient, the MAX V CPLD board that sticks into the breadboard "5M160nano" I designed and ordered the board and stencil from PCBWay.

Previously, Aluminum PCB I placed an order, but this is my first time to use FR4 PCB and stencils, so I have to look them carefully.  I would like to assemble it.

From order to arrival 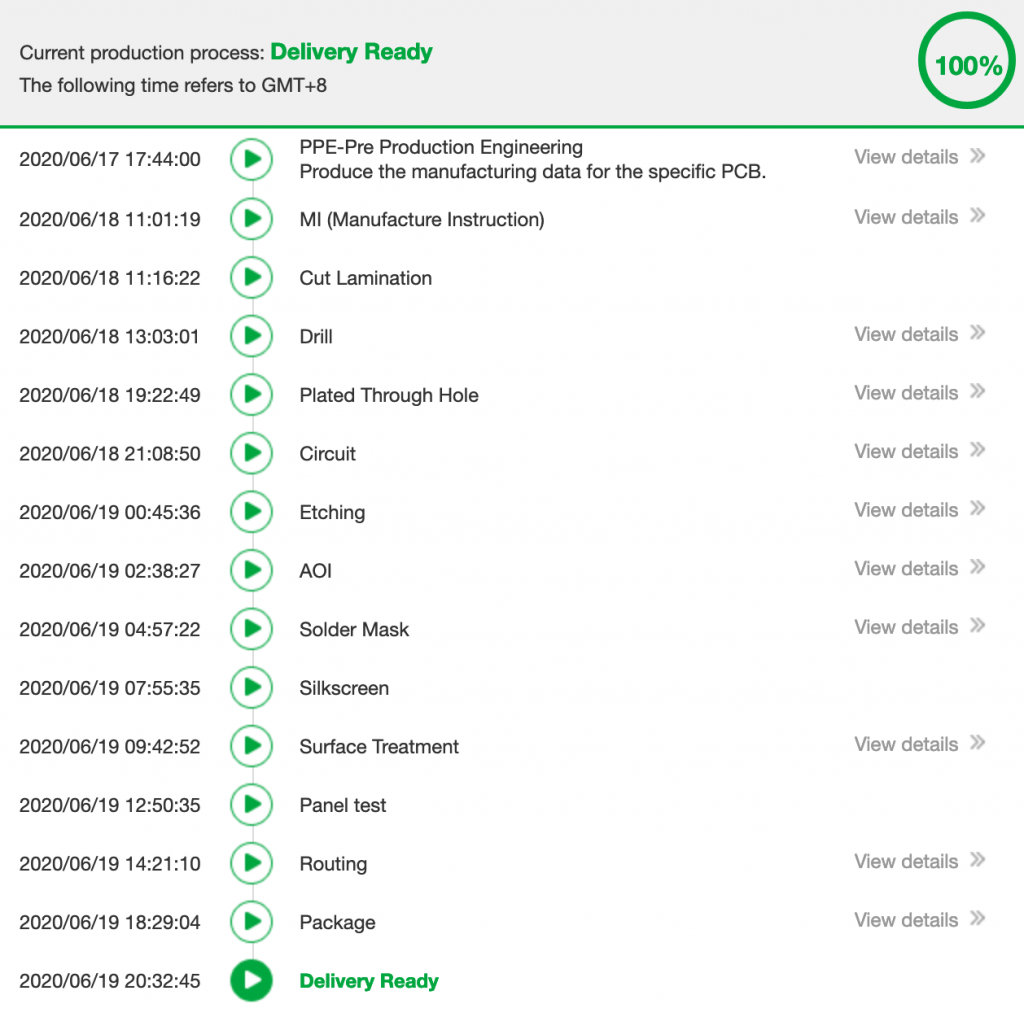 The PCB this time was designed with a line width of 5 mil, which has a finer machining accuracy than the ordinary PCB.  Therefore, it seems to be a little more difficult to manufacture than usual.

I placed the order before 6pm on June 17 and it was ready to ship the night of the 19th. 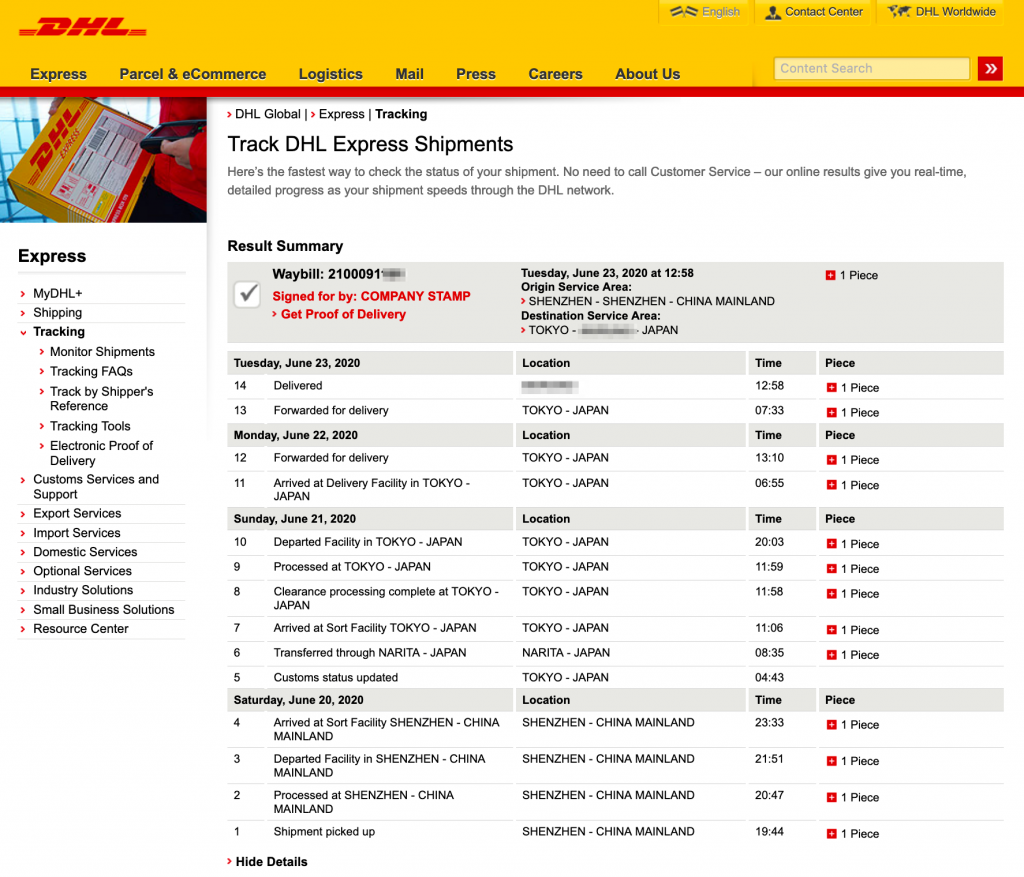 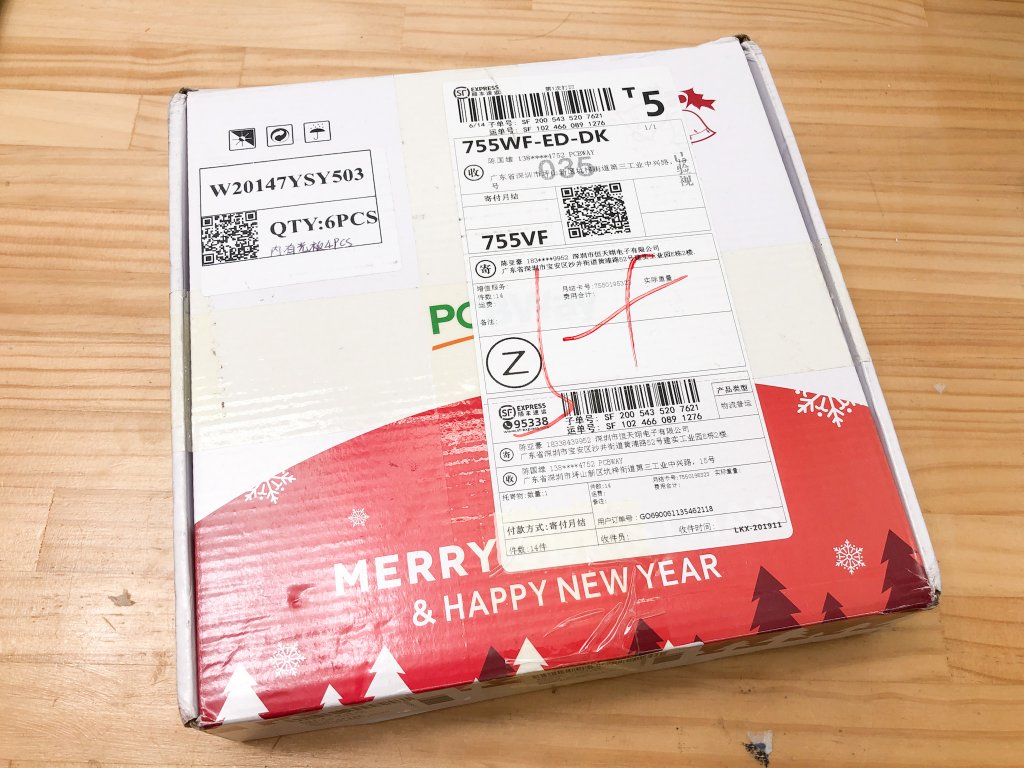 I think it's still early for Christmas, but it arrived in a special package.

How was the PCB and stencil finished?

This is the PCB I received.  It is the PCB impositioned four "5M160 nano boad".  I received a total of 11 PCB, 9 of which were all good PCB, and 2 contained defects.  This time it is a thin wire (5mil), so the defect is inevitable.  If you pay a few dollars for the option, you will receive a defect-free board for everything. 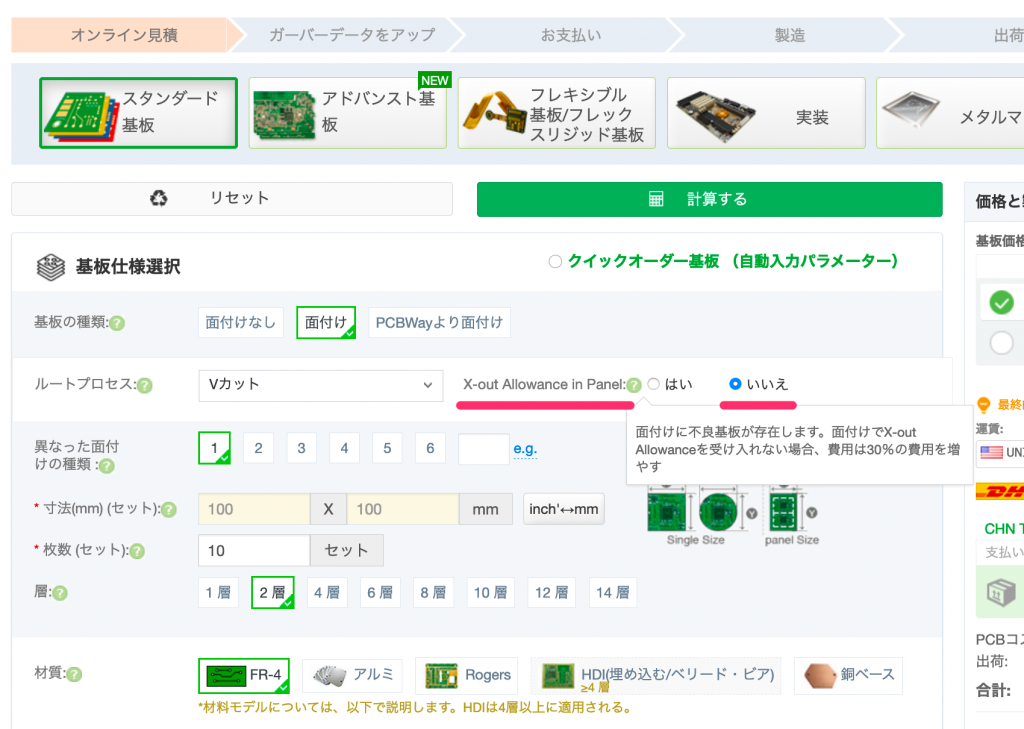 Specifically, set the "X-out Allowance in Panel" to "No" when you place the order.  The cost will increase, but you will receive all the good PCB impositioned within the PCB. 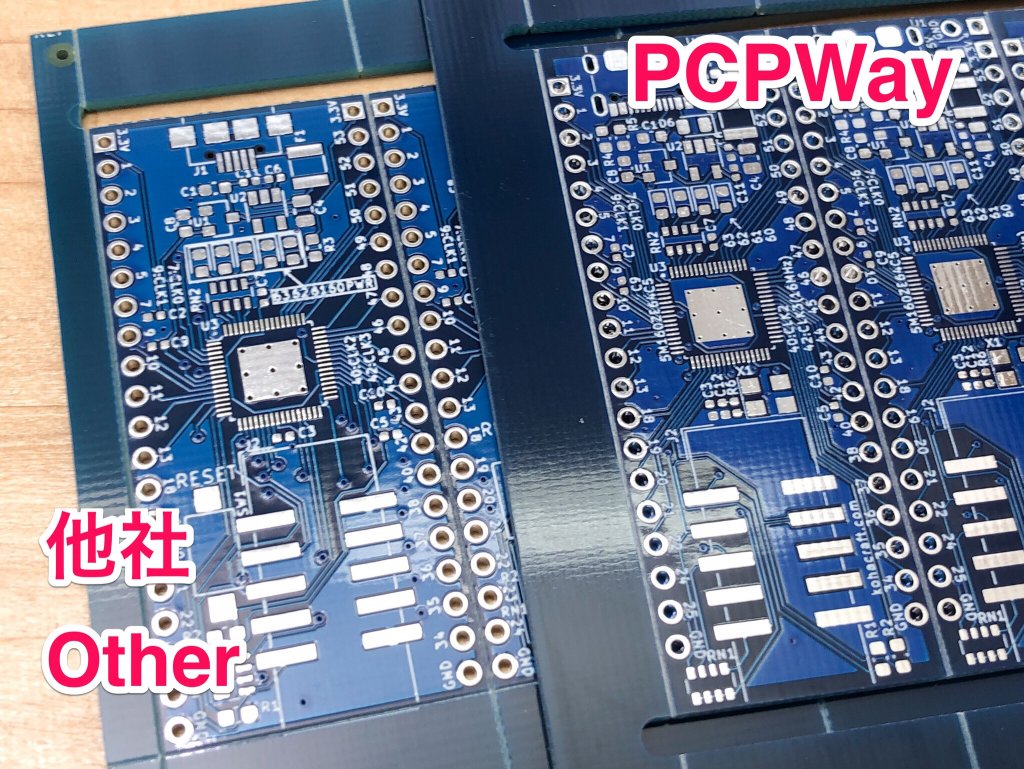 Let's take a look at the finished PCB. The pattern is very beautiful.  There seems to be no resist shift.

In the photo above, the left is the PCB made by another company one generation ago, and the right is the PCB made by PCB Way.  You can see that the silk made by PCBWay is clearer than those made by other companies.  The silk printing are small with a height of 0.7 mm and a line width of 0.15 mm, but they are printed nicely.  The square silk on the JTAG connector is 0.1mm wide, but it prints nicely without blurring or fading.  The silk doesn't seem to have shifted. 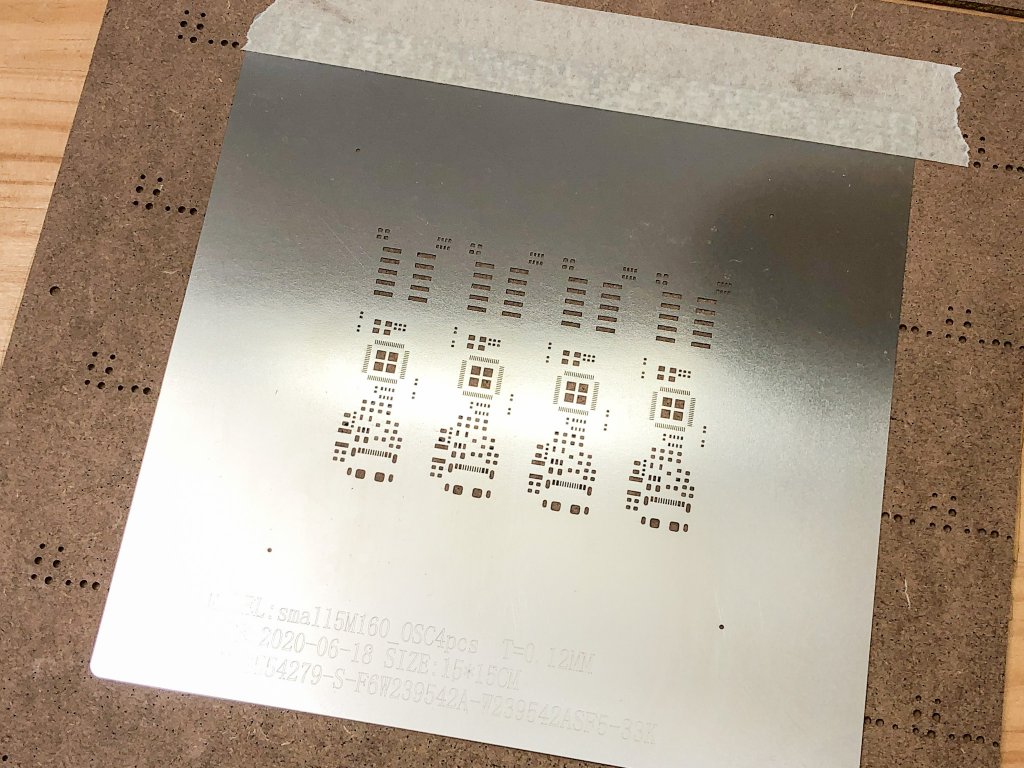 When I placed my order, I requested "Please cut it to 150mm x 150mm" in the "Other Special Request" section, and they cut it as requested.  Even if a large stencil arrives, it is difficult to place it, so this size is good.  Check the accuracy of the stencil when I print the solder paste.

Assemble just two of them for testing

First of all, in order to confirm that the circuit operates properly, I would like to verify the operation by mounting only 2 of the 4 impositions. 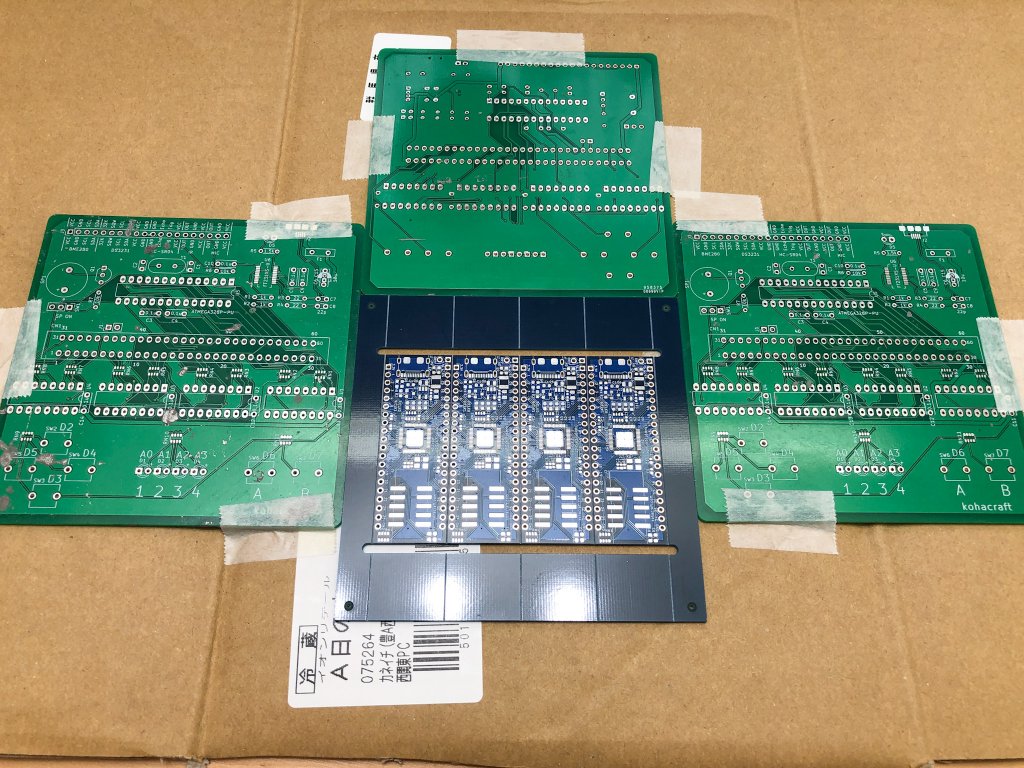 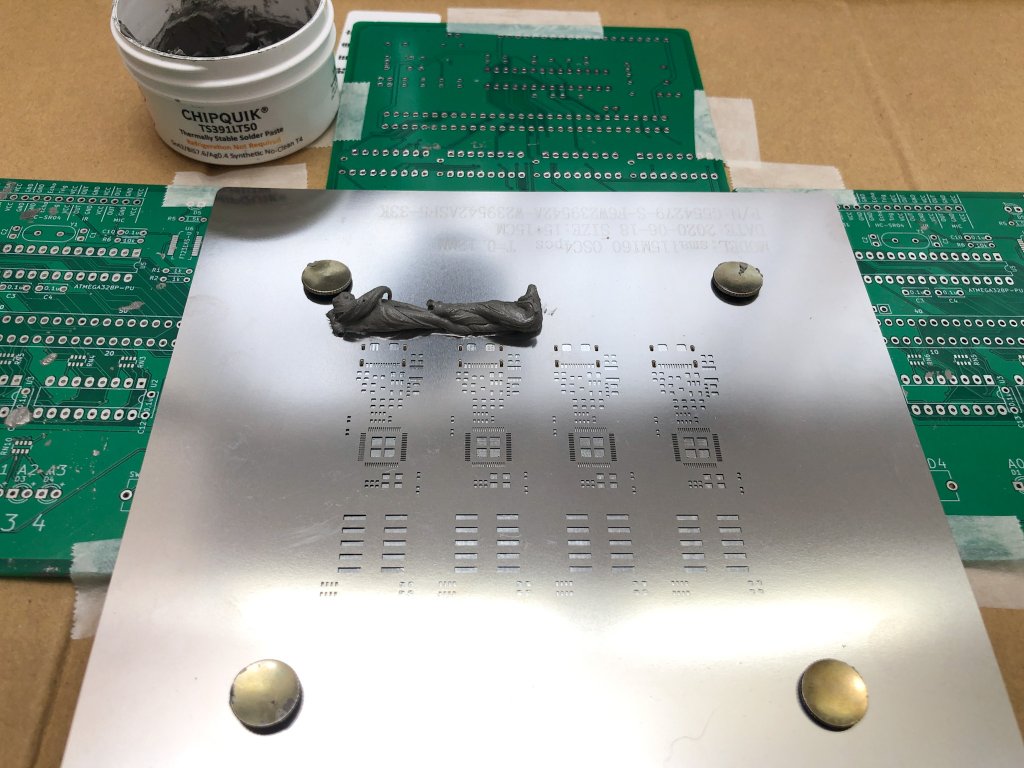 Place the stencil on top of the PCB and position it with thumbtacks, and put solder paste on only the left two.  Solder paste is CHIPQUIK's TS 391LT50.  Since the grain size is smaller than that of ordinary solder paste, the solder paste will come out cleanly even with a fine stencil. 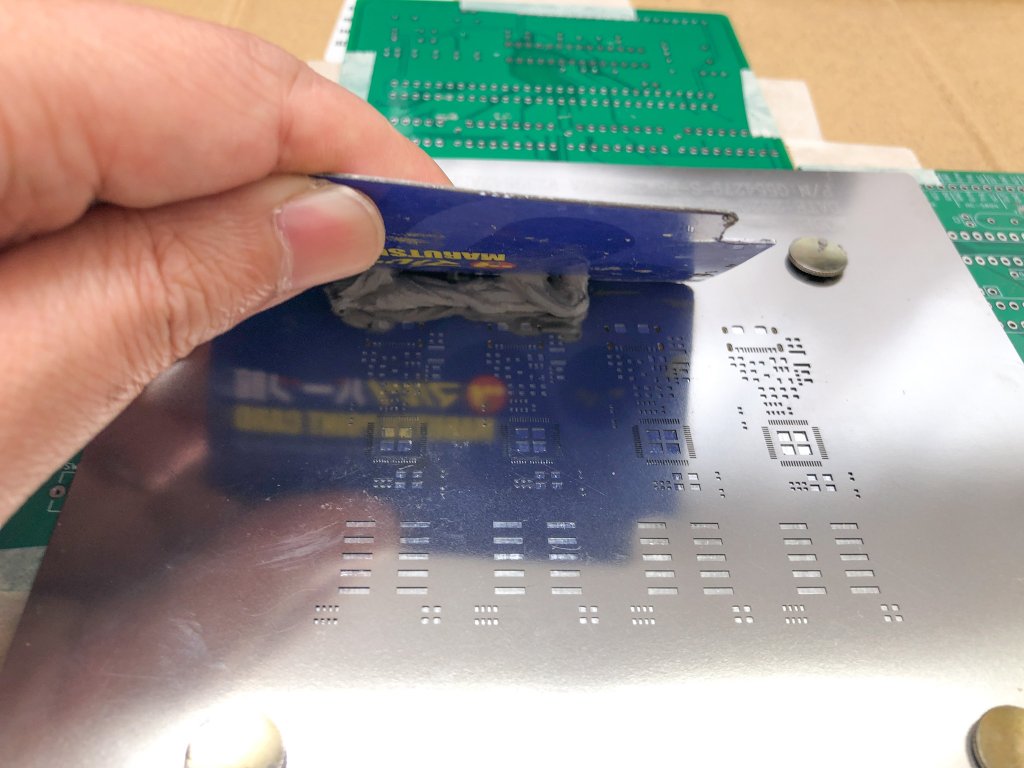 Print the solder paste using a credit card or other card.

The solder paste was printed nicely.

I will look through using the digital microscope.  It is printed nicely.  You can see that the PCB Way stencil accuracy is perfect. 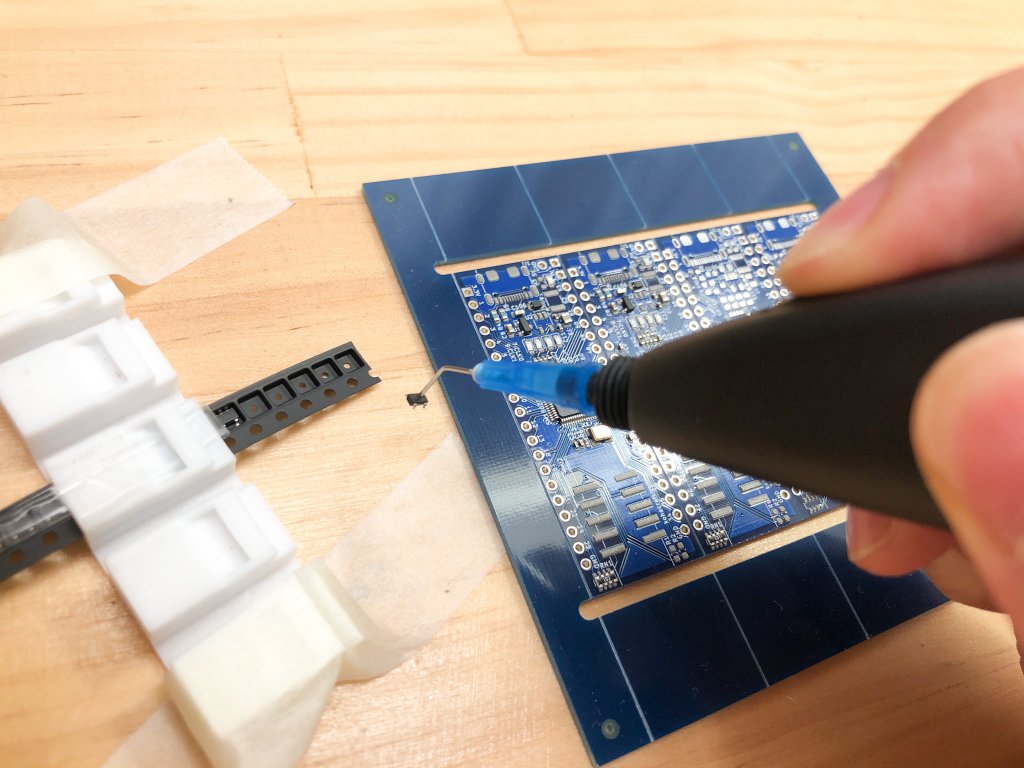 Using an electric vacuum pick, the parts are mounted rapidly. 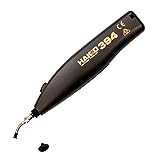 Everything (USB connectors, 1005 sizes, and anything) can be mounted with an electric vacuum pick (JTAG connectors are hand mounted).

I finished mounting all the parts on it. 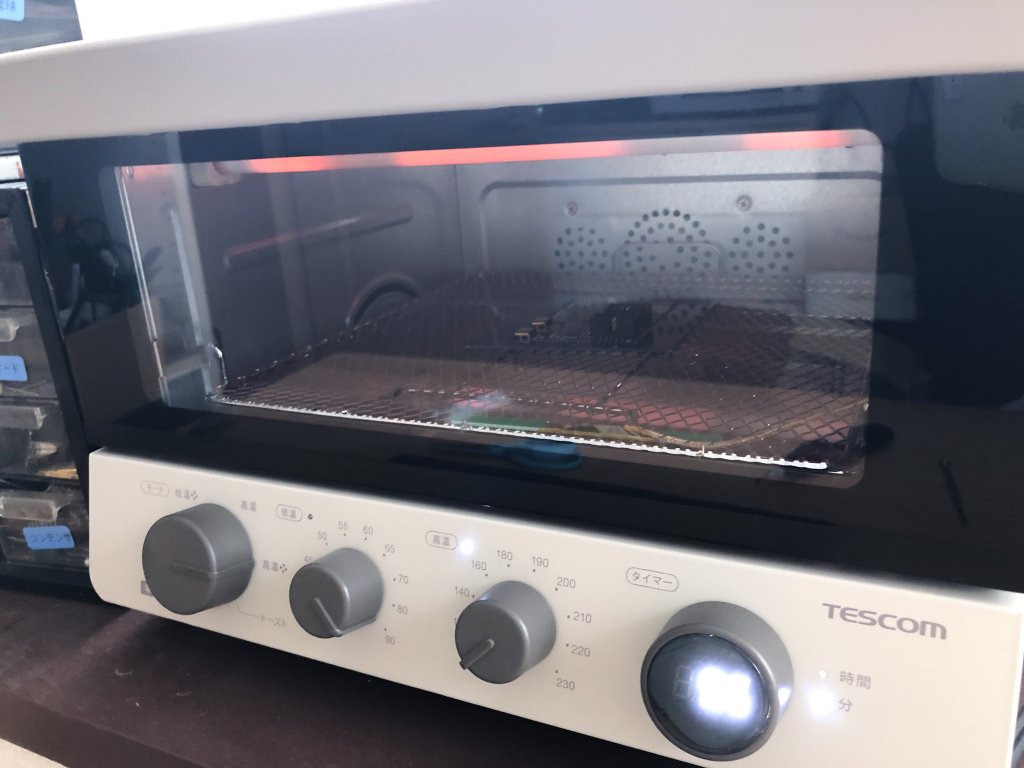 It is a convection oven that can reflow the entire chamber at a uniform temperature with hot air.  I use it.

Some of the "1005" were misdirected, but other than that I was able to reflow almost completely cleanly. 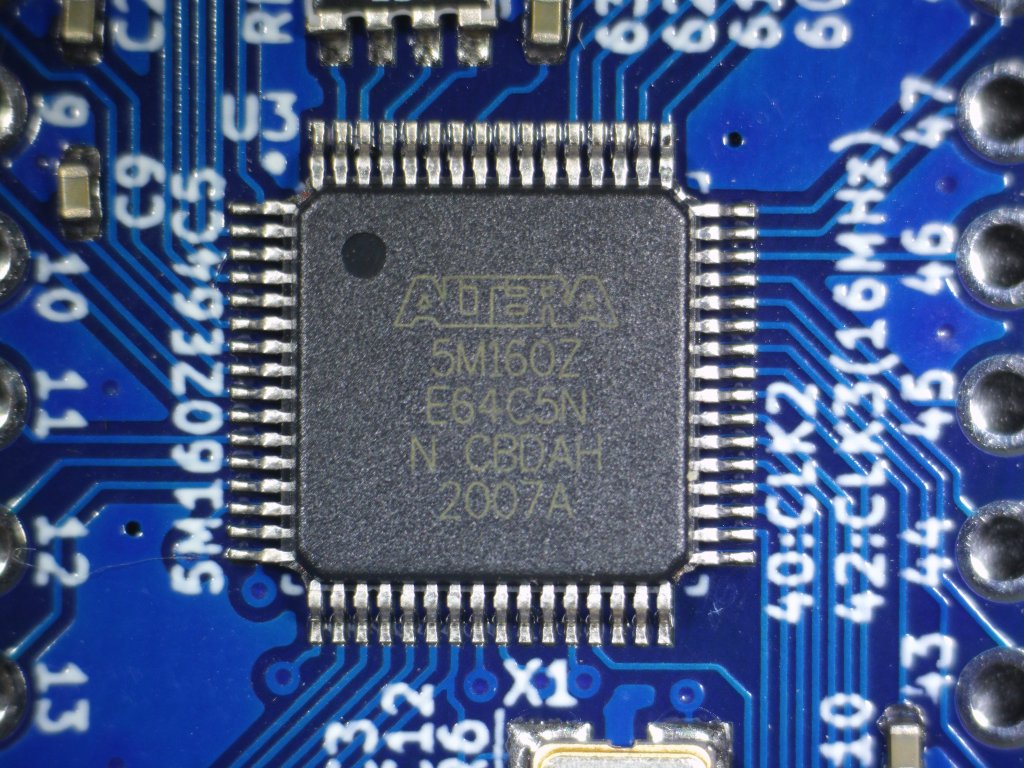 Let's look through using the digital microscope.  This CPLD has a very narrow pitch of 0.4 mm, but it was possible to reflow very neatly without generating solder balls.  CHIPQUIK TS391LT50 solder paste can be reflowed very neatly.  This has a much lower failure rate than the Chinese solder paste I used to use. It's recommended.

When I connect the USB, the LED lights up and I can see that there are no shorts or other problems for now.

Next, let's connect the USB-Blaster to the JTAG connector to see if the CPLD is recognized correctly by the Quartus Prime.

Click the "Auto Detect" button in the "Programmer" software.  It will then scan for devices connected to JTAG.  The screen shows that the "5M160ZE64" is connected.  CPLD has been recognized successfully.  The PCB seems to be working fine.

Next, I'll write a program to make the LEDs glow.

This also worked fine and the LEDs glowed like a flowing light.

Now I have finished checking the operation of my CPLD board "the 5M160nano" that I made using the PCB Way substrate and stencil.  I checked the operation, so I'll try to mass-produce it.

A little bit of mass production 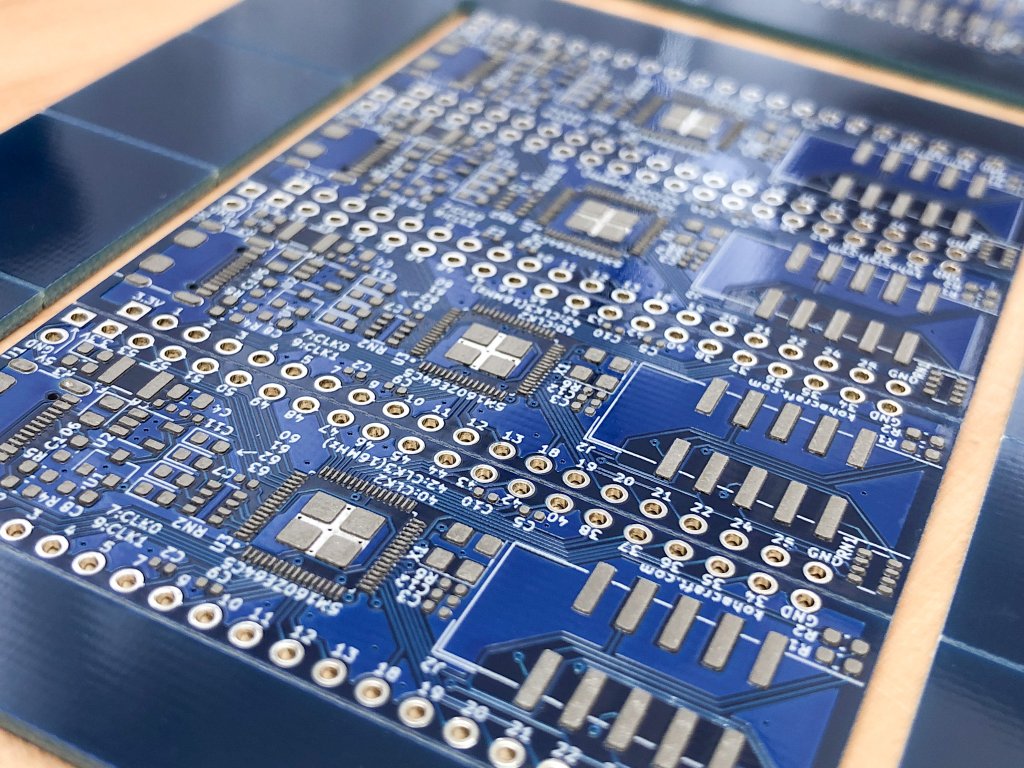 The work is the same as before.  I mounted only 2 of the 4 imposition PCBs, but this time, I will mount them all.

Then reflow.  In the reflow process described above, a 1005 size component changed its direction during reflow, so I lengthened the low temperature time so that the solder paste and the component would blend in better.

It's nice.  I was able to reflow it nicely.

I connected the USB-Blaster to the JTAG terminal to see if the CPLD was correctly recognized by the Quartus Prime, and everything was recognized correctly.

I was able to check the operation of everything and mass production was a great success.

PCBWay substrates and stencils are perfect

For the first time on PCBWay, I ordered a slightly complicated PCB with a line width of 5 mil and a stencil, but it was perfect.

The "V5M160nano" board of MAX V CPLD, which sticks into the breadboard, was completed safely.  This makes CPLD experiments very easy to do.  The fact that the clock is on it is also convenient.

How long I get the PCB from PCBWay? Mounting components on electronic paper control PCBs.