The video capture cable was the IO data with the most word-of-mouth in AMAZON.

When the Nintendo Famicom is disassembled, it contains two parts: the CPU board into which the cassette is inserted and the RF conversion board that converts the signal into an antenna signal.

The part of the cable connecting the two boards has a video output and an audio output.

For the time being, we can connect jumper wires and experiment with breadboard.

First, the video output was connected directly to the video capture via a 1000uF capacitor. It was displayed on the screen, but it was dark. It seems that the current is not enough. So I made an amplifier circuit with transistors.

The output of this circuit has a waveform like this.

Yellow is the output of the video amplifier with the capture cable connected, and blue is the audio output waveform.

When displayed using the capture software of the personal computer ...

It was displayed on the screen! ! !

The audio signal was directly connected to the capture cable, but the sound was not too loud and did not crack, and the volume was just right.

Therefore, it can be displayed and played back on a PC using only a transistor video amplifier circuit and a capture cable. !

I went out of the castle in "Dragon Quest 2", but the slime was too strong and died immediately.

I heard the music I used to listen to in the past! ! !

I am very happy.

Speaking of which, there was also a Nintendo Famicom mini. Is this HDMI or something? 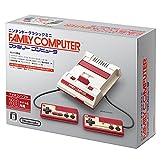 If you want kazzo clone, you can purchase it here

I make a UV-EPROM writer.