Principle of solar cells and LEDs

I have a very ordinary red LED. Shine a light on this LED and measure the voltage generated by the tester. 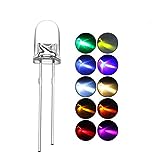 For the light source, I used bright LED lights with good color rendering.

The power generation is very weak, so we have to get the LED lights very close to the thing, but it did generate about 0.66V!

So you can generate power with LEDs.

I tried connecting 4 LEDs in series so that a higher voltage could be generated. But the result was that the voltage went down to about 0.25V.

I don't know why, but it seems that it doesn't perform as well in series as it does in one.

Does the amount of electricity generated depend on color?

Does the red LED hit the blue LED light to generate electricity?

Let's shine the blue LED light on the red LED used to generate electricity.  The current of the blue LED on the light-emitting side is set to 10mA.  Move the glowing LED closer to the LED on the generator side. Then it generated about 0.8V.

It seems to generate electricity even if the color of the generating side and the emitting side are different.

Does the green LED generate electricity by shining green light on it?

Then it only generated about 30mV.  Unlike earlier, it does not generate power at all.  Different colors seem to have different strengths and weaknesses in power generation.

Comparison of generating voltage for all color combinations

I prepared red, yellow, green, blue, and white LEDs, changed the color of the generator and the light-emitter, and tested how much power we could generate by combining all of them.  The current of all LEDs on the light-emitting side is set to 10mA.

The results are shown in the table above.  You can see that there is a difference in the amount of power generated depending on the color combination of the LEDs on the generating side and the LEDs on the emitting side.  Let's take a look at them in order.

If the LED on the generation side is red, all colors of LEDs on the light-emitting side can generate power, but the green, blue and white lights are especially powerful.

If the LED on the generator side is green or blue, almost no power is generated if the light emitting color is red, yellow or green.

When the LEDs on the generator side were white, almost no power was generated no matter what color the light emitting side was.  The white LED has a structure where the blue LED is coated with a white phosphor that makes it difficult for the light to reach the other semiconductors.

As long as the LED on the light-emitting side is blue, any color of LED on the power-generating side can generate power well.

Red LEDs tended to be better for the generation side and blue LEDs for the emission side.

LEDs can both emit light and generate electricity

It turns out that LEDs can also generate electricity. Depending on the color combination, I was able to generate a voltage of about 1V to 2V.

However, I found that for some reason the voltage drops when connected in series.  Therefore, it seems to be unable to generate a large voltage to power LEDs or microcontrollers.

Now that we know that LEDs can both emit light and generate electricity, I'd like to play with this property.

Experiment to make the LED a "glowing light sensor"
日本語版はこちら The other day, I experimented with the use o...

PCBgogo has a fast job! The "Candle Panic" game board using the "glowing light sensor" is now complete!